Ramblings of an Arabic Student in Tamazgha

Ramblings of an Arabic Student

When most people think of Morocco, they probably don’t know too much about the country. Maybe they conjure up vague images of deserts or colorful market squares, or some couscous and a man wearing a fez. All of these do exist in some fashion, although Moroccan culture is definitely more rich and varied than its stereotypes. But the standout symbol that most people associate with Morocco is a camel, and the typical Bedouin nomad, scarf-wearing people that ride them into the desert,  à la The Arabian Nights. I’m usually not one for overly touristy experiences, but I had heard that the Sahara desert was an unforgettable experience. To that effect, a few friends and I headed to Ouarzazate and Merzouga, two cities near the edge of the Sahara desert, this past weekend. Once there, we did the typical touristy camel trek into the desert, stayed overnight in tents to look at the stars, and headed back early in the morning. This trip had been on my Morocco bucket list for a while, and I’m glad to say that it didn’t disappoint.

We departed from Marrakesh early Saturday morning, and headed through the high Atlas mountains. I was surprised by how much green vegetation there was growing high in the mountains. Sometimes you could even see snow at the top. 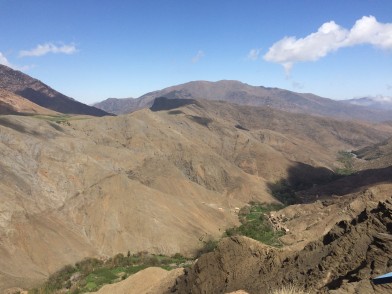 Passing through the Atlas mountains

Our goal was to reach Kasbah Ait Benhaddou, a small village that was an historic outpost along the caravan route between Marrakesh and Merzouga for desert traders. It is now a UNESCO world heritage site, with lots of red clay buildings. Sadly, it was a bit of a disappointment, as the city has almost entirely been made into a tourist stop, with lots of people selling overpriced scarves and trinkets. It has also been a filming site for lots of Biblical/Middle Eastern blockbusters, including Jesus of Nazareth, Lawrence of Arabia, and Gladiator. The view from the top was still pretty awesome, though.

After Ait Benhaddou, we made a quick stop in Ouarzazate, which has also been a film set for many famous movies. There’s even several film studios and a movie museum that has parts of old film sets. We also briefly drove through the center of town that’s known for its Rose Festival, which mainly manifested through a lot of small roadside shops selling violently pink rose-scented products. 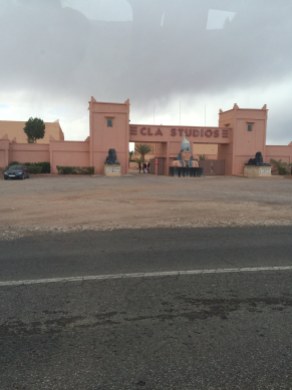 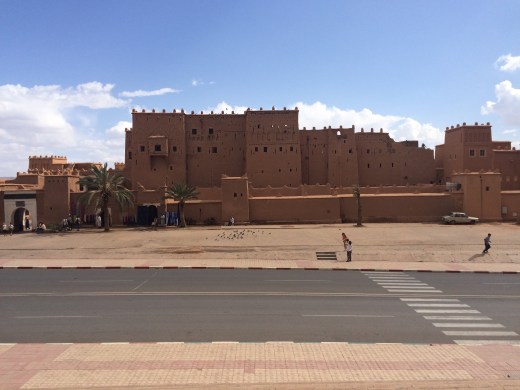 That evening, we dumped our bags and slept at a small auberge (like a hotel) near the Dades Valley. The next day, we again started early, and went for a short hike through the Togoda canyons. On one roadside stop, we saw “الصحراء صحراؤنا” (The Sahara is our Sahara) carved into a mountainside, an ever-present reminder of Morocco’s claim over the Western Sahara.

It was almost evening when we arrived in Merzouga, with just enough time for us to drop our bags and head out to meet our camel caravan. We then trekked for about an hour and a half through the Erg Chebbi dunes (the second highest sand dunes in the world), just in time to disembark at our camp and climb the dunes to watch the sunset.

My camel’s name was Omar, and at first, our relationship did not get off to a good start. He made his displeasure known by grunting loudly as I climbed onto his back, although he eventually settled down once we started moving. Riding a camel is not exactly the most pleasant experience– it’s a bit bumpy, and sometimes I felt like I was going to fall off, but luckily there was a pommel on the front of the saddle you could hang on to. However, the view was absolutely amazing– the sand dunes rolled on in all directions, looking like frozen waves. It almost felt like we were on the moon, since the landscape was so dry and alien. We climbed to the top of a dune, which was much harder than I expected, and gave me a great appreciation for the camels’ two-toed, padded feet that kept them from slipping in the sand. As the sun set, you could see the sand slowly change color, going from gold to yellow to a light pink glow. 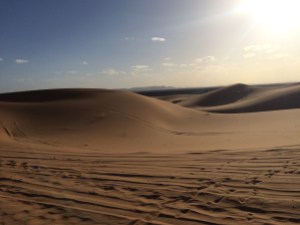 Our Berber guides cooked us dinner, and we sat around a fire to look at the stars (although unfortunately, there weren’t many since it was cloudy). It was pretty amazing to walk out out of the tents and be surrounded by silence and sand in every direction.

The next day, we left the camp at 5:30 a.m. Omar voiced his frustration about our early departure with another moan, and I agreed with him, although I was slightly less vocal about it. The good thing was that this gave us time to watch the sun rise over the dunes. We made it back to Merzouga for a much-appreciated shower and breakfast.

The last part of our journey, however, was a bit of a long haul. In a series of long bus rides, we made it about 675 kilometers (about 420 miles) from Merzouga back to Agadir, which I think has got to be a record for the longest I’ve traveled by car in a single day.

Originally posted on Walk Memory Lane:
Couscous (North Africa) In the North African nations of Algeria, Mauritania, Morocco and Tunisia, people understand couscous better than most. The dish originated here, and in 2020, UNESCO recognized not only the dish itself, but also the knowledge associated with how couscous is produced. Couscous is a cereal, thus…

Originally posted on Bean's Books and Beyond:
Apparently this was a top seller throughout Covid, but I didn’t read it then or in high school or college. Glad I finally got to it and glad Project Lit book club At SJHS chose it for its first book this year. Here’s my review on Insta:…

13 September. Augustine: A Kingdom without Justice is Robbery.

Originally posted on agnellusmirror:
“How like kingdoms without justice are to robberies. Justice being taken away, then, what are kingdoms but great robberies? For what are robberies themselves, but little kingdoms? The band itself is made up of men; it is ruled by the authority of a prince, it is knit together by the pact…